LEMURIA is an adventure third-person shooter with gunfights, dialogues and numerous cutscenes. The action takes place against the backdrop of a migrant uprising and the onset of a deadly epidemic. When a civilization begins to collapse and its laws cease to operate, only the strong will survive!

Weapons, girls, cars, gold, uranium and wads of cash – what more could you want? Maybe a small SSD-drive with millions of stolen digital coins? No? Well, then the main prize is to get out of all this alive! 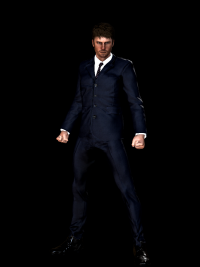 The main characters of the game – an average guy Alex from a poor suburb and an aspiring spy Kanta Anora – make their way to the African country of Lemuria, each for their own reason, each from their own end of the world, each in their own way. Who they will become – friends, enemies, lovers – we do not know. And neither do they.

Following his dreams, Alex manages to do a lot:

Meanwhile, Kanta Anora rejected the restrictions and prejudices of her compatriots and could (and most likely would) arrange an Armageddon when performing any, even the simplest, task.

The game uses the music of two luminaries of game soundtracks – the endlessly varied Chris Onyak and the piercingly melodic John Leonard French. And we have developed a unique mixing system that allows this music to gently adjust to changes in gameplay.

We spent a huge amount of time developing and customizing the NPC AI. Unfortunately or fortunately, the NPCs never found self-awareness, although they organized a union (but this is still unconfirmed). They learned to attack, retreat, shoot from cover, look for first-aid kits and ammunition, unite in groups and scatter in different directions, overcome obstacles and wait out of sight of the enemy.
And all this without pre-prepared triggers, which makes each battle unique and replayable.

With a couple of clicks in the settings, the video sequence of the game can be changed in the range from prim melodrama for the whole family to the shamelessly unbridled VHS action movie of the 80s.

The rigidity of the image on the screen can be varied from a sharp TV camera to soft film.

The player can adjust both the ratio of the time of gunfights to the time of dialogues, and the complexity of these gunfights, according to their preference. It should be noted that in any case, tactical decisions will be more important than shooting accuracy. It is also important to note that this game discourages camping and fights against it with increased visibility and damage taken.

We tried to make the gameplay as varied as possible, and in each new location the player will most likely have to adopt new tactics. And with the correct settings, the game will move to the next stage 10 seconds before you the player tires of the current stage.

In addition to uncompromising firefights and rescuing the next “demoiselle en détresse”, the player will have a fair amount of stealth and a fantasy-style immersion into the depths of Kanta’s subconscious beyond reality.

This game is a neat entertainment for a few nights, giving you the opportunity to shoot, talk, wander through the magical jungle and maybe do something else…

When setting the maximum bloodiness, large blood splatter effects occur when killing characters. The game contains examples of sexual material: nudity and kissing of characters. Sex is implied, although it is never shown. Dialogues can relate to sex and prostitution. The player can hear sexual moans coming from somewhere outside the camera’s field of view. The words “f**k” and “sh*t”are heard in the game. The player can be, and most likely will be, a witness to senseless surgical operations performed by mentally abnormal surgeons without anesthesia.

Download LEMURIA pc game by clicking the below download button. We are offering the live and working download links. The download links are checked, Download speed is not limited. Download LEMURIA through a single direct link. If you face any problem in downloading the game or installing the game, please write in the comment box, so that we could resolve the issue. We provide a response in 24 hours. Click the download button to start downloading LEMURIA for pc. Thanks for visiting!