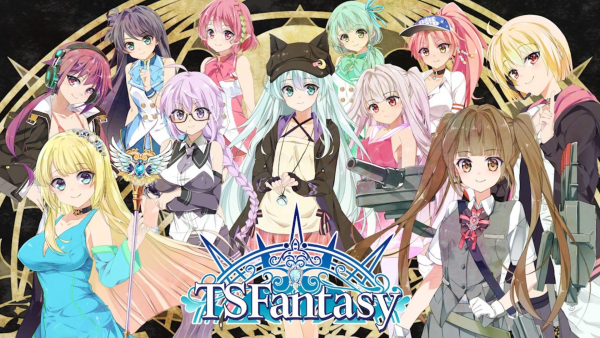 Explore TS FANTASY, and save the world using your special powers and with the help of your friends.
This is the NEW Adventure Visual Novel!!

● TS FANTASY is a game for Steam on PC and will be launching in December 2021.
● TS FANTASY is a visual novel adventure game created by the Twitch vtuber Hanarin(Cha Young A), who also takes part in character designs, game story, 3D modelling, Live2d, programming, animation videos, music, and translation.
● TS FANTASY will be available in English, Korean, Japanese and Chinese. More languages will be considered later in development.
● 46 peple of Classmates and teachers’ characters 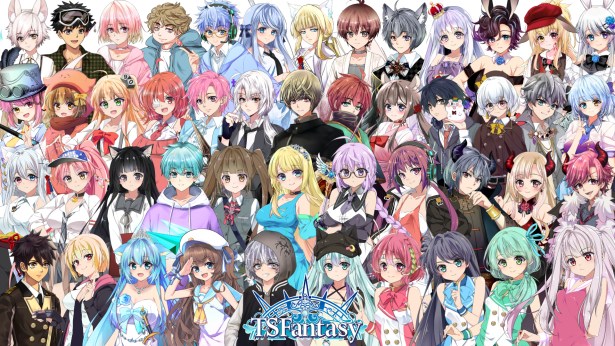 The story begins as an you, an ordinary character find out that you have special powers. As you transfer into a new school for superpowers, you try your best to get used to your new school. One day, the school holds an event to select the best student and nominate the ‘Successor of the Moon’. However, a mystery case happens as the best candidates for the event suddenly disappears. Unfortunately, your friend also gets involved in this case.

Find who is behind this mystery by searching for clues and using your superpowers!

Date with Cute Girls as you save people!

Your relationship with characters differs according to the choices you make. You can be enemies, friends, lovers, and even lead the characters to death. Be careful with your choices as the relationship can completely change the story! 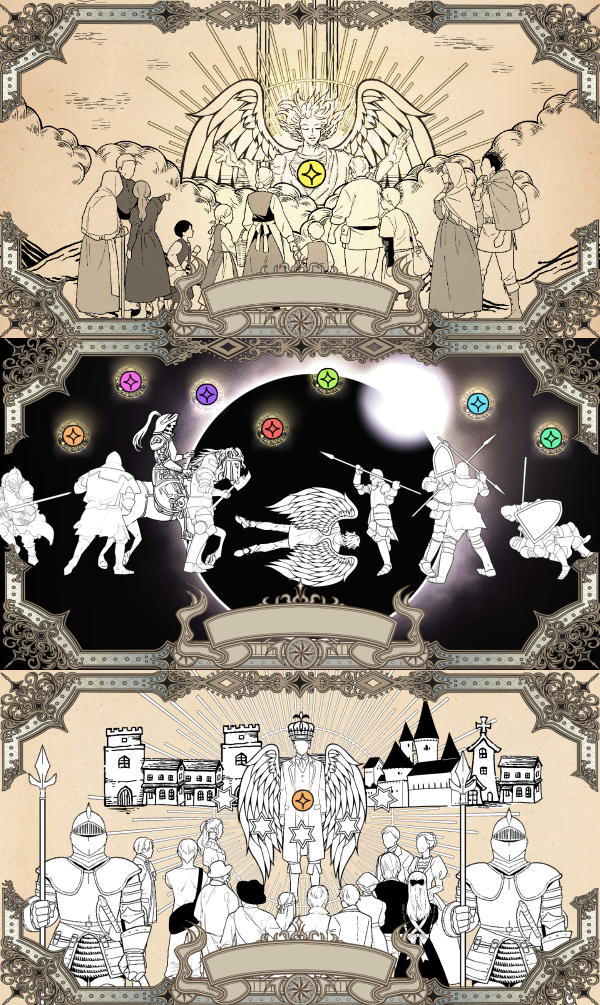 Long ago, God sent his son into the world with a Stellar Piece, a gem that contains strong powers, and special wings that protect the gemstone. The son of God brought richness and peace into the world and humans build temples to worship and thank him.
One day, the evil devils broke the peace and killed the son of God. As the devils stole the gem, the gem broke into pieces and scattered all around the world. Afterwards, the Saba family collected the left pieces of the gem and descended the power of God’s Son to defeat the devils. Ever since then, the Saba family became the king and ruled the world. 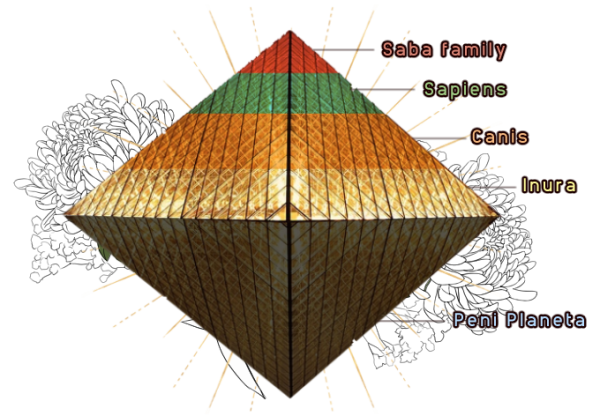 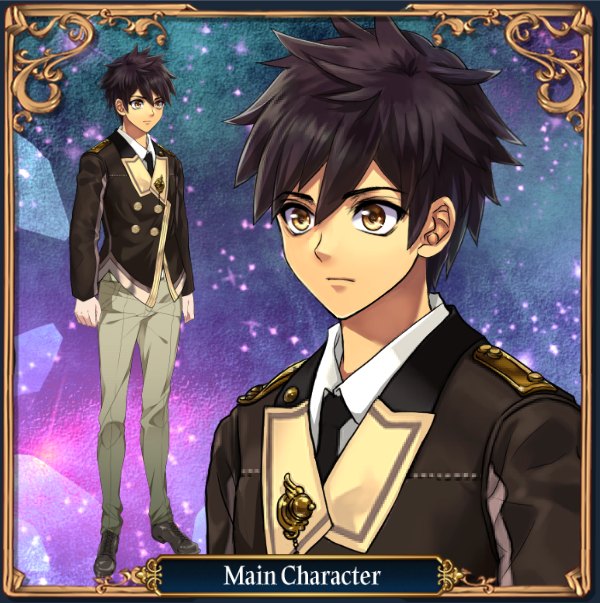 ● Main Character
The main character is an ordinary boy who one day finds out that he has superpowers. He has no family as they have passed away.
Special Abilities: Reverse time (Singularity)
The main character has the ability to reverse time and go back into the past. However, as he cannot fully control his powers, he transfers to TS High School.

● Binggoo Heo
Binggoo is a girl full of mysteries. Her codename is Black cat, and she is on a special mission. She loves cats.
Special Abilities: ???

● Danull
Danull is a genius who earned a doctorate in medicine at a young age of 20. She discovered her superpowers from her creation of the special ability tracking device.
Danull works as a school nurse in TS High School and takes care of students. She is also a gamer and often plays games in the nurse’s office.
Special Ability: Lust Master
Danull can control people by using charm.

● Hobin Ji
Hobin is the class representative who has a strong sense of responsibility. With a tsundere personality, Hobin guides the main character and helps him in school. Hobin likes to dance with cute dolls and is somewhat aware of Mulbakbak’s behaviors.
Special Ability: Ruby Crown
Hobin can easily control and manipulate fire.

● Mulbakbak
Mulbakbak is from a noble family and she has lived abroad during her childhood. Unlike her looks, she is an innocent girl and loves soccer. She normally hangs out with her childhood friends Akgom and Ethia.
Special Ability: Aqua Scratch
Mulbakbak can control water and create aqua blades.

● Endorphin
Endorphin is a girl who loves programming. She is in the science department and is often seen working on machines and programming. Endorphin is a shy person who might seem blunt, but she has an innocent and child-like side. She has big breasts.
Special Ability: Demon Explosion
Endorphin can increase the weight of gravity.

● Shio Tebasaki
Shio is born from a witch family, but as she could not stand the strict traditions from her family, she ran away from home. She is currently exploring different countries to find her new life.
Special Ability: Sky Wing
Shio can sense the air current and has the ability to fly.

● Riker
Ryker has an easy-going and boyish personality and enjoys spending time outdoors riding bikes and playing games. Ryker visits the nurse’s office often to play games or get treated from the wounds from playing with his bike.
Special Ability: Break Speed
Ryker can move with very fast speed.

● Terra
Terra is the leader of Kiralika who became an idol by meeting Gom producer while working at Gomgom convenience store. Tera is looking for her missing dad and has a tsundere but affectionate personality.
Special Ability: ???

● Hanarin
Hanarin is the vocalist of Kiralika and has worked the longest at Gomgom convenience store. She dropped out of middle school and has lived as a hikikomori before. Her parents are in Sapiens class, which is the top social class. It’s hard to know what she is thinking about.
Special Ability: ???

● LooLoo (Louisha)
LooLoo is a member of Kiralika and has a free-spirited nature.
She is an 232-year-old alien from outer space who crashed into Gomgom convenience store. LooLoo is pretty
famous in outer space as she is also known as the red devil.
She likes playing games and watching manga and is often seen playing games in the nurse’s office.
Special Ability: ??? 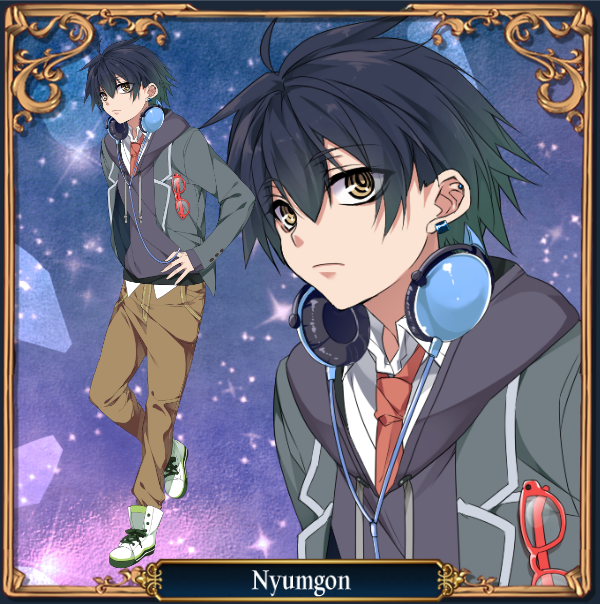 ● Nyumgon
Nyumgon is always quiet and often listens to music with headphones in the classroom. Nyumgon is a shy person and does not like standing out.
Special Ability: Perfect Sniper
Nyumgon can throw any object to any direction and hit perfectly straight. 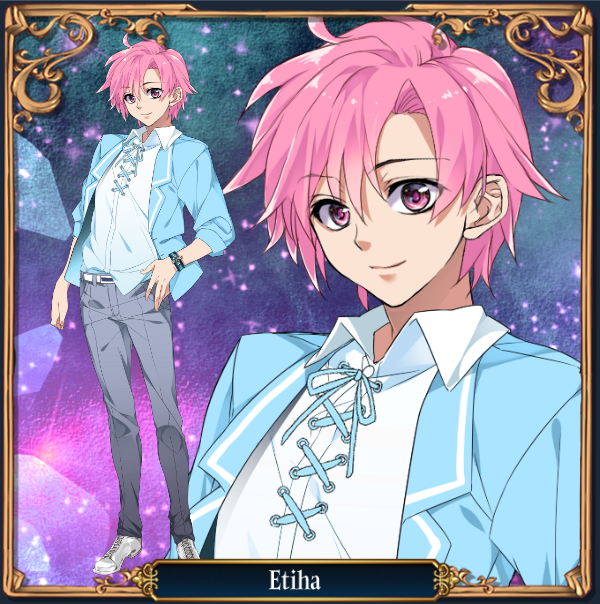 ● Ethia
Ethia is a feminine-looking boy who is very kind to other girls. Ethia is often seen with Mulbakbak, who is a childhood friend.
Special Ability: Invisible Shield
Ethia can distort light and make people or objects invisible. 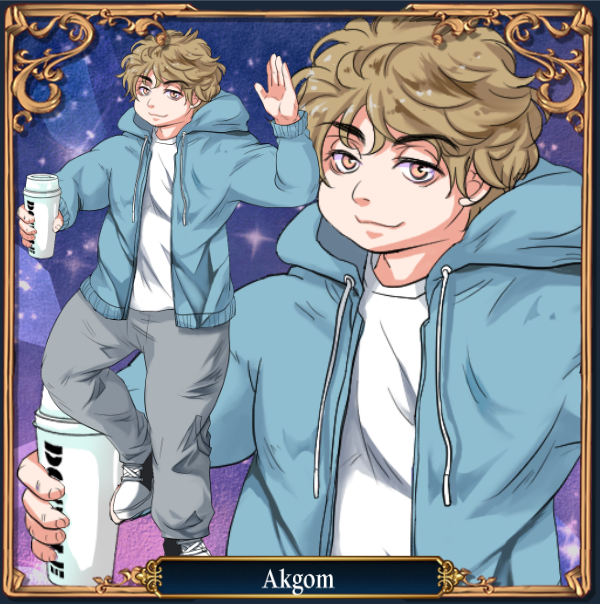 ● Akgom
Akgom has a cheerful and friendly personality. Akgom enjoys wearing sweatsuits and is popular to girls. Akgom is often seen with Mulbakbak, who is a childhood friend.
Special Ability: Beast Lightning
Akgom can turn into a beast and have enhanced physical skills. After transformation, Akgom sometimes loses the ability to think clearly.

● Opponents
You might have to battle with inhuman beings. 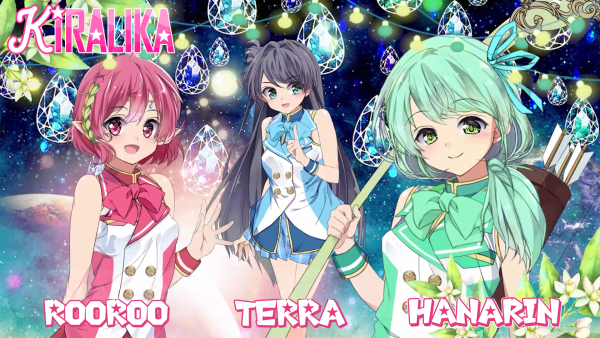 Apart from Kiralika and the main character, the character designs in TS FANTASY is targeted for my male Twitch channel viewers who has been a big support to me. To thank my viewers, I opened a character design event.
In addition, ‘TS’ means ‘Tsu’ which indicates Twitch viewers in Korean. ‘TS’ also means ‘Trans Sexual’, as male viewers can experience gaming as a female character. Since this game was inspired by FF FANTASY, we decided to name this game ‘TS FANTASY’.

The OST from TS FANTASY is created by Hanarin. With your help, we hope to create more music to further improve our game. With music, you would be able to imagine and recall TS FANTASY whenever you hear our OST. We will add some of the music here, so please go and check our music.

Solve cases in TS FANTASY by chatting to others, investigating the field, and battling with superpowers.

By utilizing Live2d technology, female main characters can use the Dialogue function with facial expressions and motions. Characters can vividly communicate with players as they move on screen. If you become friends with other characters, you can borrow their special abilities and gain help solving the mystery.
When chatting people or female characters, it is important to observe their behavior and make the correct choices.
Don’t forget that your choices can impact your future!

Run and explore the field in TS FANTASY! You can communicate with other characters, obtain items, and learn new information. Find out hidden events or items to figure out clues.
Since there is a time limit for investigation, you need to react quickly and make the best moves. Make wise choices to create the future you want. 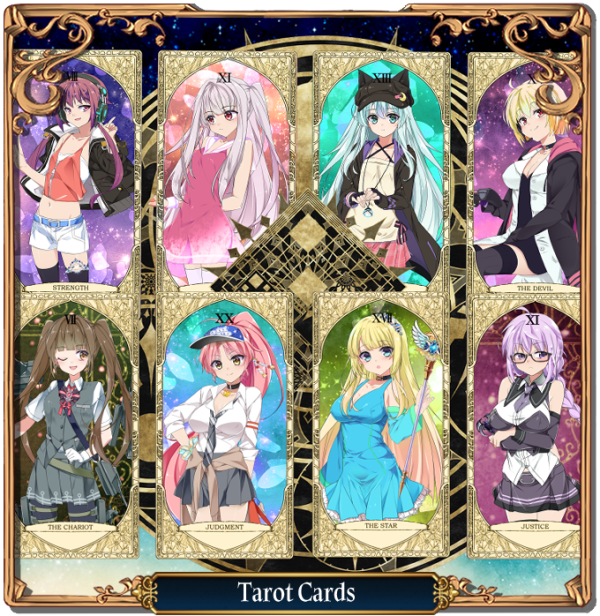 You can read tarot cards in the game. Ask questions or find out your luck in the game. The cards will show you the way.
Depending on who you read the card with, your future might change as well. 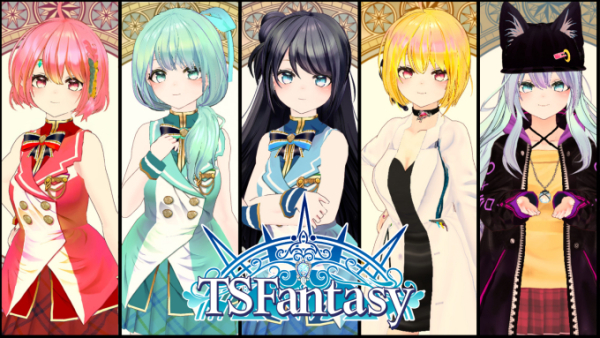 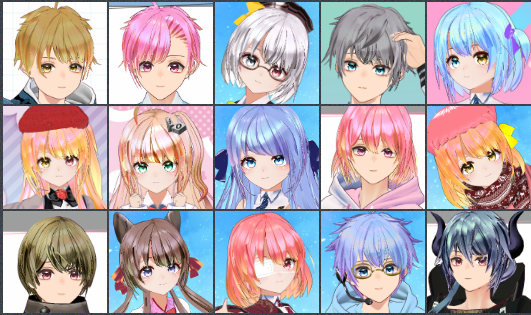 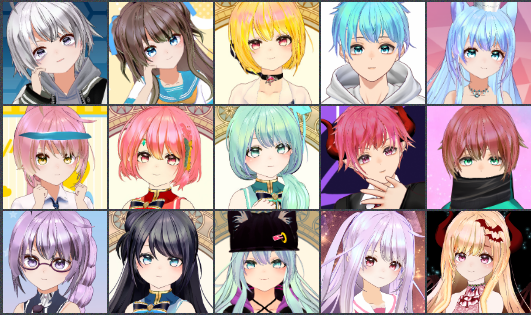 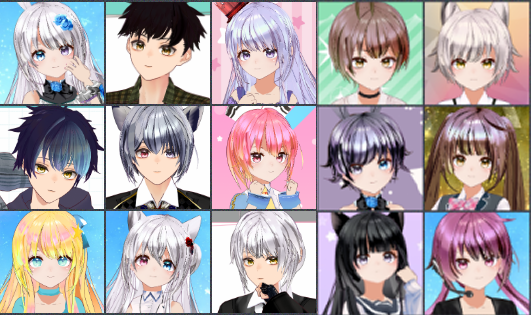 Download TS FANTASY pc game by clicking the below download button. We are offering the live and working download links. The download links are checked, Download speed is not limited. Download TS FANTASY through a single direct link. If you face any problem in downloading the game or installing the game, please write in the comment box, so that we could resolve the issue. We provide a response in 24 hours. Click the download button to start downloading TS FANTASY for pc. Thanks for visiting!